PC Andy Cook, Theydon Bois Community Police Officer, received the Community Service medal from Epping Forest District Council at their recent Civic Award Ceremony. Andy Cook joined Essex Police as a Special Constable in 1988 and after fifteen years voluntary service became a Police Constable in 2003.PC 1474 Andy Cook joined the Epping Forest Community Policing Team in 2008, where he has served the areas of Theydon Bois, Abridge and Stapleford Abbotts. In his nomination for the award a senior officer said: “PC Cook works for his community, he is dedicated to his beats and constantly looks for ways to protect them from crime, whilst safeguarding our vulnerable residents.” In his spare time PC Cook also volunteers as a Police cadet trainer and in total has given over 33 years of police service to our District. 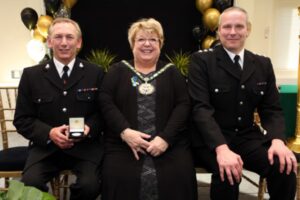